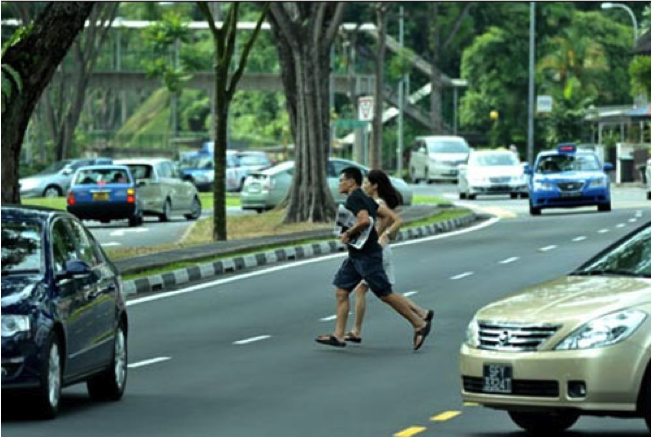 The light is shining a blaring red, but there seem to be no cars nearing the intersection. A pedestrian decides to rush across, hurrying to their final destination. Beep Beep an annoyed driver honks their horn. If you’re a New Yorker you have definitely experienced this. In the city that never sleeps, people are constantly jaywalking. Jaywalking is when an individual crosses the street without regard for approaching traffic. In New York people are always rushing, whether is is to work or home, and feel that waiting that one minute is a nuisance.

New Yorkers are not only proud jaywalkers, but also lawbreakers. Jaywalking in NYC is a common practice that New Yorkers commit every day and therefore they technically break the law on a daily basis. According to Title 34, Section 4-04 Subsection (b) of the New York City Administrative Code: “No pedestrian shall enter or cross a roadway at any point where signs, fences, barriers, or other devices are erected to prohibit or restrict such crossing or entry and no pedestrian shall cross any roadway at an intersection except within a crosswalk.” Jaywalking is clearly illegal in NYC and can result in an individual getting a fine and in extreme cases, jail time (Pix11 News).

Jaywalking is hazardous and is a major contributor to street danger. Annually, New York sees approximately 4,000 people injured and 250 killed by car accidents (Vision Zero). Though not every injury is due to jaywalking, jaywalking does add on to the numbers. Many accidents could be prevented if pedestrians took more of an initiative to be aware of their surroundings and abide by the law.

It must be noted that many New Yorkers are not even aware of the jaywalking law or simply disagree with it. When asking a New York pedestrian, Lisette Espinal, about the jaywalking law she seemed surprised and asked “There’s a law against jaywalking?” Generally, jaywalking laws are not enforced. This is because it is such a routine action that people do not even see as it wrong. Millions of New Yorkers jaywalk and therefore it may be unrealistic for police officers to enforce the law. They cannot hand out tickets and handcuffs to every individual in the city and the few times they do it is seen as unfair since a neighboring pedestrian does not get punished for the same crime. Though it is uncommon to see this law enforced, improvements by the NYPD have been initiated.

However, New Yorkers need to watch out as the NYPD is stepping up their game. In 2014, Mayor Bill De Blasio pledged to minimize pedestrians deaths. As a result, Police Commissioner Bill Bratton, in January and February of 2014 had given out 452 jaywalking tickets, in comparison to only 531 tickets for all of 2013 (NY Post). Police officers are not holding back as much as they used to. Some New Yorkers think this a great way to lower the pedestrian death rate. Jamie Nicolo, a high school student from the Academy of American Studies, admits that she is guilty of jaywalking, but believes the law should be enforced. She said “I first hand got to experience the brutality of jaywalking. Two years ago, my brother’s friend passed away crossing a busy intersection carelessly at Queens Boulevard and was hit by a car. If she only walked a few seconds faster or slower, or even peeked over at the lights she could have still been here today. The Boulevard of Death took the life of a precious sixteen year old.” However, some people, like Lisette Espinal, find it to be “ridiculous.” According to Ms.Espinal, “there is no efficient way to enforce a law as such. I mean, realistically speaking, people in the city are always going to jaywalk and police officers can’t possibly chase everyone around to hand them a ticket. The only way they could maybe give out tickets fairly is by having an officer standing at every cross way which would be a waste of resources. The NYPD should focus on real crimes, not little petty ones like this.” Either way, the next time you plan on crossing the street with a blaring red light you might want to think twice.

Jaywalking is like breathing to many New Yorkers and though the law may be more strongly enforced, it is doubtful that pedestrians will totally give up this habit. It becomes a question of what is more important: enforcing pedestrian safety or enforcing other laws?