Since the start of the global pandemic and quarantining, New York has been through a rough patch. With the rise of protesting for civil rights movements like Black Lives Matter, rioting, the presidential elections, as well as circumstances due to COVID-19, crime has been on the rise. It also doesn’t help that recent issues with police brutality have brought tensions between civilians and the police. In light of these events and issues, it brings the question, do New York residents feel safe? Do they feel protected by the police and laws or threatened instead?

In this year alone, there has been a 130% increase in the number of shooting incidents and a 102% increase in shooting victims. According to Insider, “crime stat analysts have revealed that they anticipated a decrease in crime due to the pandemic as the majority would work remotely and no one would take the subway anymore.” According to city crime statistics, “there has been a 33.2% increase in the number of murders compared to the same time last year.” It has been an unprecedented time for NY as the state has been going through a pandemic, anti-racism and police reform protests, and a presidential election all within the same time frame. Recent bail reform efforts that have been demanded throughout the years may also play a part in the rising crime. COVID plays a big factor in these events along with unemployment and mental health. 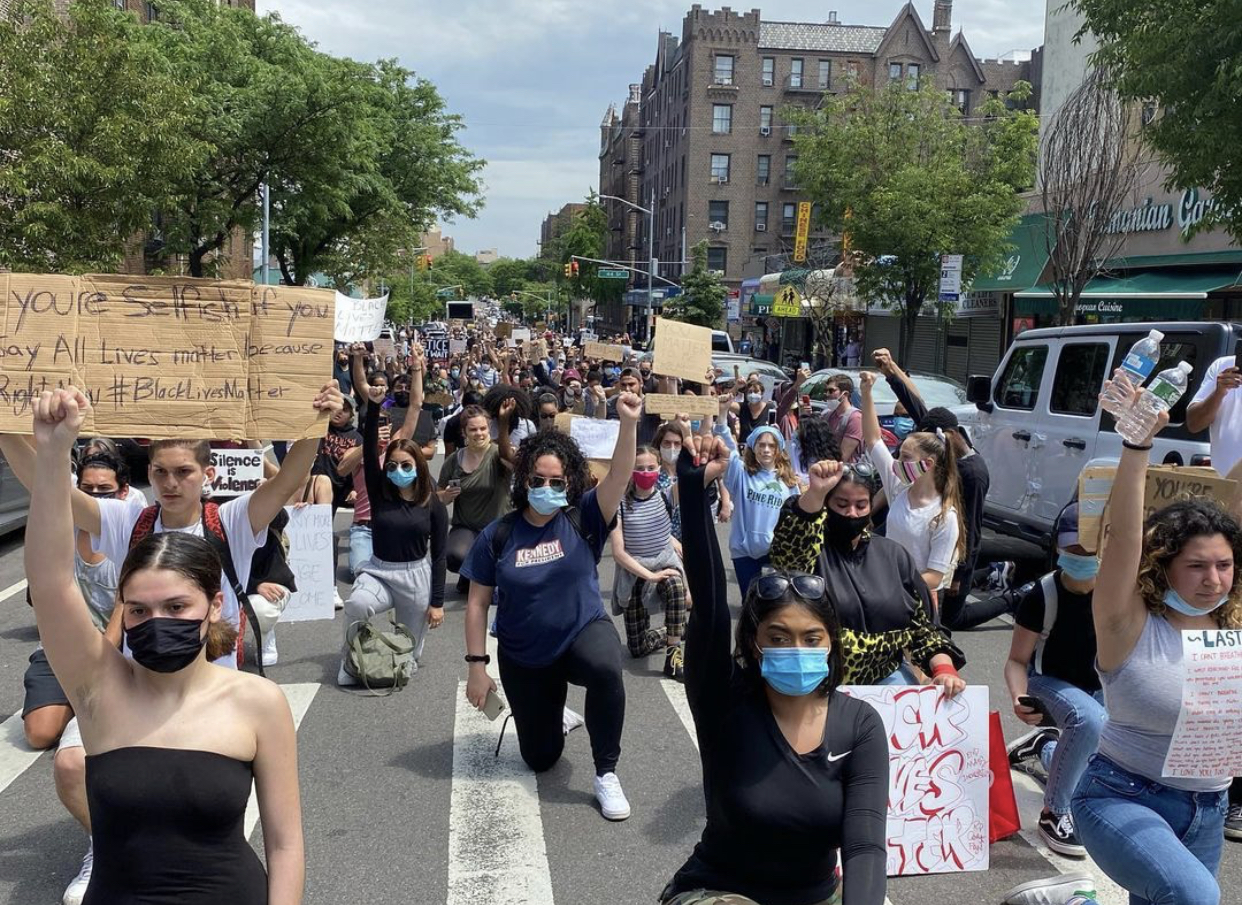 The number of shootings in New York City so far this year is more than twice as high as all of 2019. Violence has been felt across all the boroughs. Here are examples of some crimes detailing the dangers during this time. October 2020 in South Jamaica, Queens , a 27 year old man was shot and critically injured in a drive-by shooting in the presence of his girlfriend and 7 year old child, AMNY reported. In November 2020, right outside a Bronx subway station, the NY POST  reported 3 victims shot, a 16-year old in the left leg, 22 year old in the left shoulder, and 23 year old in the right leg all taken to hospitals expected to survive.In Bedford- Stuyvesant, Brooklyn, an 80 year old woman was shot in the face aboard a Metropolitan Transportation Authority bus in broad daylight with other passengers as witnesses reported by CBS.

These are only 3 out of hundreds of shooting incidents that happen weekly in NYC. Even with strict gun laws and regulations through the SAFE act and more legislation on top of that,

according to state figures , just last year  “there were 7,885 violent crimes committed with firearms in New York. More than 4,200 of those crimes were in New York City’s five boroughs.

Citizens across the city have been uneasy and stressed during this time not only dealing with the global pandemic but other unforeseen circumstances such as the Black Lives Matter movement, protesting, and election tensions. Namgyal Tsomo, manager of Butlers at a 5 star hotel has been working late hours during this pandemic. She has expressed concern with her safety at times especially during the nationwide protests. “ People vandalizing buildings, stealing, fighting in the streets. Going home is a problem because of all the people blocking exits and entrances as well as the presence of police which wasn’t very reassuring in light of recent events “ Tsomo recalled. When asked if police made her feel safe, Tsomo said, “ Maybe in the years before but right now, I don’t trust the police if I have problems and I feel a little scared of them. The way some of the police act here reminds me of the police back home in India.” As an immigrant from India, uneasiness is expected, but what about from someone born and raised here? Hana Park, an 18 year old college student brought up an app called Citizen that gives alerts when crimes happen in the neighborhoods. “ I’ve always gotten alerts all the time living in Woodside. Reports of assaults and robberies, but never anything too serious until now. There have been many shootings and violent crimes these past few months which surprised me so much” said Kim. When asked if she feels safe going out at night she replied, “ My parents don’t even want me out in the mornings. With the current pandemic and all the animosity, I’d rather not go out at all. According to The City , “ The city is expected to finish 2021 with a 14-year high in that category of violence. NYPD records show that murders are up 40% compared to 2019.

The NYPD has provided crime prevention safety tips and protocols to help ensure a better and safer community. There is the crime stoppers initiative where there are rewards for anonymous tips and information. This program has helped solve more than 5,300 violent crimes, including over 1,400 murders and attempted murders. The NYPD also offers security and safety services for those who want to be proactive and involved in their community. More details can be found at https://www1.nyc.gov/site/nypd/services/law-enforcement/law-enforcement-landing.page For those who don’t trust the police, there have always been neighborhood policing groups that have served for the sole purpose of maintaining peace in the communities. One of the most well-known groups are the Guardian Angels. They patrol all over the city including subway stations. In light of the pandemic and anti-asian sentiment, the Guardian Angels have been policing areas that are densely populated by Chinese-American folks like Chinatown and Flushing according to Curtis Silwa, the founder of the volunteer crime-prevention organization.