Change starts with the youth of the world. Young people are the future. This year, the youth of America have been showing up to the polls – they wanted their voices to be heard. According to Census.gov, in 2016, only 46% of voters consisted of young voters, while 71% of voters were men and women between the ages of 65 and older. In  2020, America’s youth decided it was their time to take action and not sit back and watch others choose the fate of their country. Although the Presidential election may have been an extremely important election, it is not the only one everyone can care about.

TuftsNow published an article on November 17, 2020, where there is an image of a map that shows what it would look like if only youth were to vote. Young voters prefer Joe Biden to Donald Trump in 32 of 39 states that had been reported. In Georgia, America’s youth made up 21% of Biden’s votes, it may sound low, but considering the population of Georgia is about 10.62 million, it is an immense percent. If only youth voted, America would most likely be a Democratic country for years. As stated by MSNBC, back in 2016, approximately 44,107 young people, which consists of 18-29-year-olds, voted early in Florida. In 2020, over 257,720 young people voted early, which is almost 6 times as much. It doesn’t stop at Florida, many states have seen a higher youth voting rate this year.

While interviewing Ms. Eashin, we touched upon why youth voting really matters.

Interviewer: Why do you want to vote?

Alisha: I feel like it’s my responsibility to make a difference as a citizen. I’m living here and I want to try to fix problems in my community.

Interviewer: Why do you think it’s important for the youth to vote?

Interviewer: Should the voting age be 17 years old?

Alisha: I think that if we change the voting age people will constantly change it. Yeah, I want to vote, but we should keep it at 18. What if these kids aren’t educated enough. But I also think that 17-year-olds can be capable, not many changes once someone turns 18. We would most likely have the same beliefs.
A senior from Bryant High School named Rajveer Singh has some different views from Alisha. Unlike Alisha, Raj doesn’t follow politics at all. He has the mentality that he won’t vote unless he sees someone worth voting for. He was also unaware of what local elections were, but eventually while talking to him he understood the importance of being able to help choose the best for your community. Alisha believes locals are even more important than Presidentials because since it’s closer to home, you have a better chance of being heard. Raj thinks differently, he believes presidential elections are more important as he thinks the president has a bigger voice than local representatives, and the president has a bigger impact. Ultimately, Raj and Alisha had very similar opinions and interesting points, but they wouldn’t see eye to eye in every situation.

Interviewer: Why do you think it’s important for the youth to vote?

Raj: It’s important because it’s not a difficult task, all you need is research and an opinion. It’s a way to use your voice. It’s a citizen’s birthright to vote.

Interviewer: Should the voting age be 17 years old?

Raj: No, because there are idiots everywhere. I think it should be higher. The younger generation is easily persuaded and is influenced by social media, they can’t make opinions on their own.
There are people out there who don’t think you should have a say in politics if you aren’t 18 yet. Very often on social media, there are teens who tend to say things like  “You can’t vote, why do you care so much.” It’s important to be aware at a young age, you don’t have to be 18 in order to care about your future. Next year seniors will be able to vote for NYC’s elections, including who will become the mayor, comptroller, public advocate, ⅘ Borough President’s, etc. This may be one of New York’s biggest local elections in a while. Make sure to register to vote as soon as you can, and partake in your local elections. An important way to know which candidate you may be interested in is by looking at a scorecard. A scorecard is any ranked balanced scorecard used to rank candidates for legislative office on their voting record. Here is an example of a Racial Justice scorecard created by a bi-partisan youth organization called YVote, which I am a part of. If you are interested in making a difference beyond the polls and are interested in issues like; racial justice, criminal justice, gender justice, inequality, environmental justice, LGBTQ+ justice, and immigration justice, YVote is the perfect place for you, everyone is welcoming and you can use your voice freely, it’s a judgment-free zone. All you have to do is be in high school and show interest. There are many other organizations just like YVote, if you’re interested look into IntegrateNYC and Next Generation Politics. Here are their websites so you can learn more on your own: https://integratenyc.org/, https://www.nextgenpolitics.org/. There are so many organizations just like these, they’re only a click away. 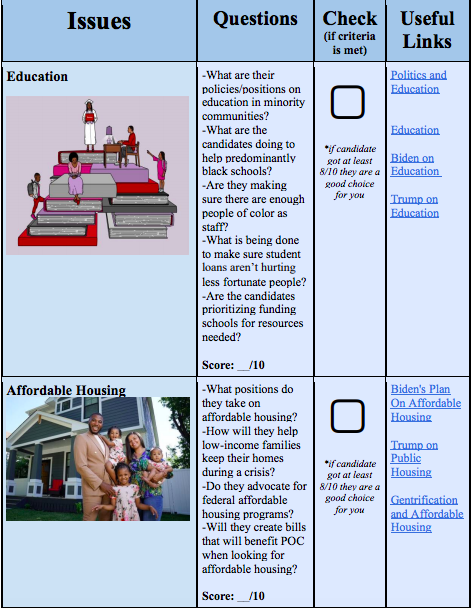 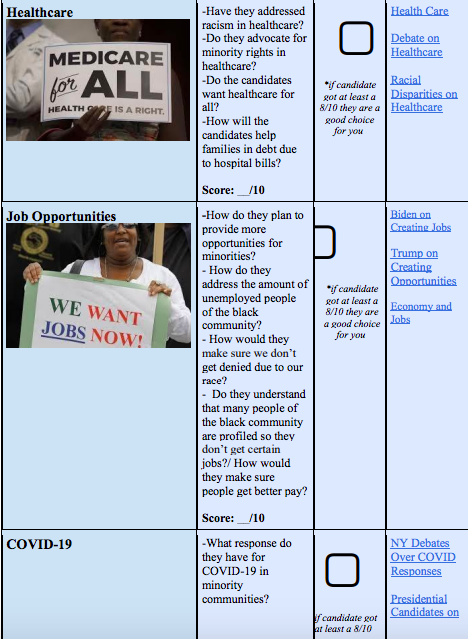 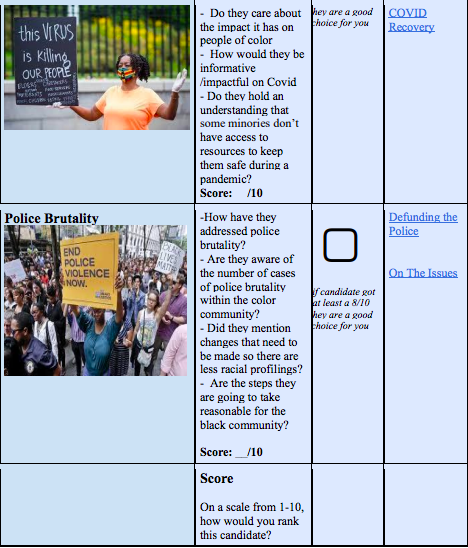